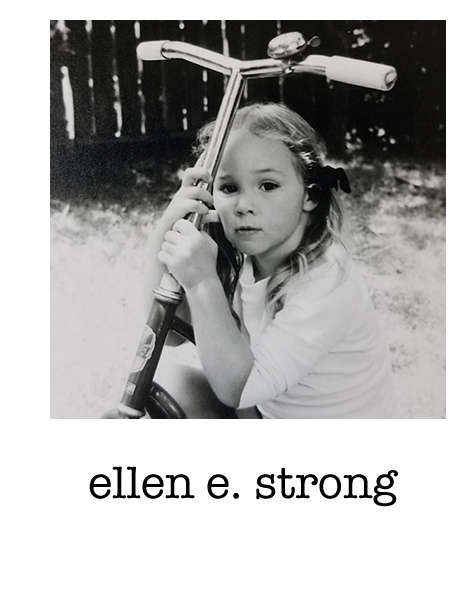 Ellen E. Strong is a Research Zoologist, Curator of Mollusca, and the Chair of the Department of Invertebrate Zoology at the Smithsonian Institution’s National Museum of Natural History. She studies the diversity and the evolutionary relationships of freshwater and marine snails. She has 260 publications.

Ellen grew up in a small town in northern California, where her first introduction to Zoology came through the shells she collected along the beautiful rocky intertidal shores. She was inspired by her teachers to look closer at fossils of invertebrates and wrote her undergraduate honors thesis on fossil gastropods at the University of California, Berkeley. What excited her most about studying snails and other mollusks was understanding the roles of evolutionary and functional constraints in shaping morphology. In 2000, Ellen earned a PhD at The George Washington University in the field of Biology on the anatomy of living gastropods. She completed two postdoctoral fellowships, one at the Museum für Naturkunde in Berlin, Germany, and a second at the Smithsonian. After two years as an Assistant Professor at the University of Minnesota and Bell Museum of Natural History, Ellen returned to the Smithsonian in 2004, as a Research Zoologist, to study the diversity and evolutionary relationships of freshwater and marine snails. Ellen is contributing to documenting and describing the biodiversity of snails and helping inform how to conserve them, even as some are on the brink of extinction. Her work has taken her from the east to west coasts of the continental U.S., and as far as Hawaii, Australia, Papua New Guinea, Philippines, Vanuatu, Malaysia, Australia, and New Caledonia.

Ellen generously mentored her first Chalkboard intern in 2018 at the Smithsonian and joined our Chalkboard team in 2020. Hurray!