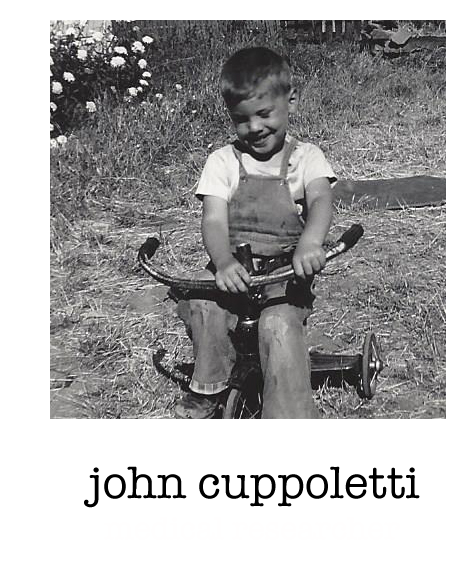 Long ago, John Cuppoletti, Ph.D. Professor Emeritus in the Department of Molecular and Cellular Physiology at the University of Cincinnati College of Medicine, upgraded his tricycle to a bicycle to a Harley. Always interested in how things move, John studied biological transport systems for more than 35 years in the UC College of Medicine, particularly ion transport processes and ion channels. He was continuously funded throughout his career, raising $30 million dollars for research from the NIH (National Institutes of Health), the military (Army, Navy, Air Force, and DARPA), industry, and foundations. John has authored and published approximately 100 research papers, holds 13 patents and was instrumental in bringing a drug to the global marketplace. He taught in the classroom and provided research experiences for high school, college, and medical students throughout his career. He trained postdoctoral scientists and faculty from around the world.

After assisting Chalkboard client, Lily Jeong*, achieve her dream of acceptance to medical school, John graciously agreed to join our team as a consultant. He brings expertise as a former senior member of the College of Medicine Admissions Committee. John gives mock interviews, reviews applications, and provides a wealth of resources to those applying to medical school or pre-med undergraduate programs. He is a strong supporter of the Chalkboard Internship Program and encourages students to explore opportunities for educational enrichment through internships, volunteer work, research in laboratories, and/or clinical experience.

John, who is from a modest background, has attempted many difficult tasks, but says he has occasionally failed or fallen short of his goals. However, his mantra has always been, “How can I do the task better next time?”, something he learned in the Ohio Village of Greenhills Volunteer Fire Department where he served for 15-years in the 1980s and 1990s. The officers never patted each other on the back saying, “You did a great job.” Instead, they asked, “How can we do it better next time?” He has since carried that question into every aspect of his life, including his work as a biomedical researcher and author. He also carried it forward into his many leadership positions as Chair of the Faculty at the University of Cincinnati, Chair of the Faculty Council in the State of Ohio, and as President of the AAUP (the Faculty Union) in the State of Ohio. He tries to instill in his students this practical method of perseverance.

John earned a BS in Biochemistry from the University of California, Davis in 1974, becoming the first in his family to graduate from college. He earned a Doctorate of Philosophy in Biochemistry in 1977, also at UC Davis.

John firmly believes that everyone who wants a B.S, M.D., or Ph.D. should be able to earn one and offers practical advice to Chalkboard clients and others on how to achieve their goals. And he is also at the heart of funding students’ aspirations. With his wife, Danuta H. Malinowska, Professor Emerita of Molecular and Cellular Physiology, he established two named scholarships for first-generation undergraduate students attending the University of Cincinnati. Additionally, as a volunteer, John is in charge of the internal research grant program at the University of Cincinnati, which provides research grants to undergraduates, graduate students, and faculty. He is dedicating his retirement to helping underserved, first-generation students achieve their dreams, just as he was able to do, no matter what the hurdles.